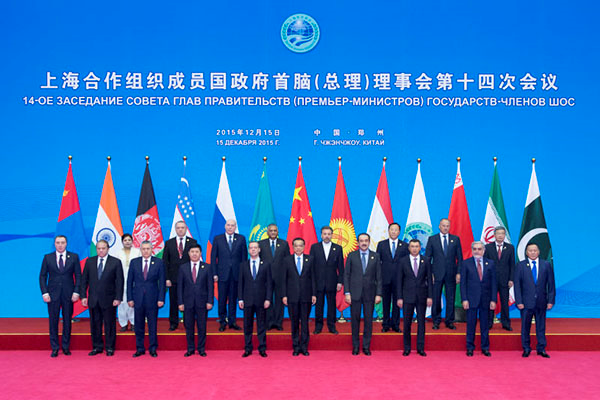 Heads of Governments (Prime Ministers) of the Shanghai Cooperation Organization Member States advocating stronger economic growth in the SCO territory, improvement of well-being of peoples and resolution of the tasks of multilateral cooperation in trade and economy in the framework of the Organization, taking into account initiatives of member states for promotion of regional economic interaction, including the project of People' s Republic of China to create Silk Road Economic Belt, state the following.

Heads of Governments believe that developing cooperation and forming of close trade, investment, scientific and technological ties in high-tech fields, such as information technologies, medical and education services, e-trade and energy efficiency, ensuring efficient protection of intellectual property rights including prevention, exposure and suppression of import and export of counterfeit goods is important. Promote financial cooperation in the framework of the SCO via creation of mechanisms of financial clearing for project activities. Together prevent and counter regional financial risks. Carry out currency swaps in the interest of upholding stability at the financial market. Use the capabilities of banking and investment structures to finance economic projects in the SCO space.

SCO held in Zhengzhou is a big good news for those companies engaged in foreign trade. With Shanghai Cooperation Organization held in Zhengzhou, the recent hot topic is all about why Zhengzhou is chosen as the host city. Zhengzhou is located in the hinterland of Henan and has exceptional advantages in transportation. Besides, it is opening to the outside, which makes it fair and reasonable for holding International conference. And this meeting will not only promote Zhengzhou’s development, but play a radiation and driving function to the surrounding provinces.

Henan Lanphan Trade Co., Ltd is a professional import and export company integrating domestic trade and foreign trade business. Our company is mainly engaged in import and export of goods, technology research and development, production, sales and after-service. Our company’s business scope: construction material, machinery equipment, hardware tools, chemical products (except the dangerous chemicals), sports equipment, crafts (except antique), children’s toys, needles textiles, mechanical and electrical products, amusement equipment, etc. Based on the development of Zhengzhou in recent years, it shows that Zhengzhou is playing a more and more important role in our country even in the world. Lanphan will rely on the developing city of Zhengzhou and grasp the opportunity. We believe that Lanphan will be well-known all over the world in the future.